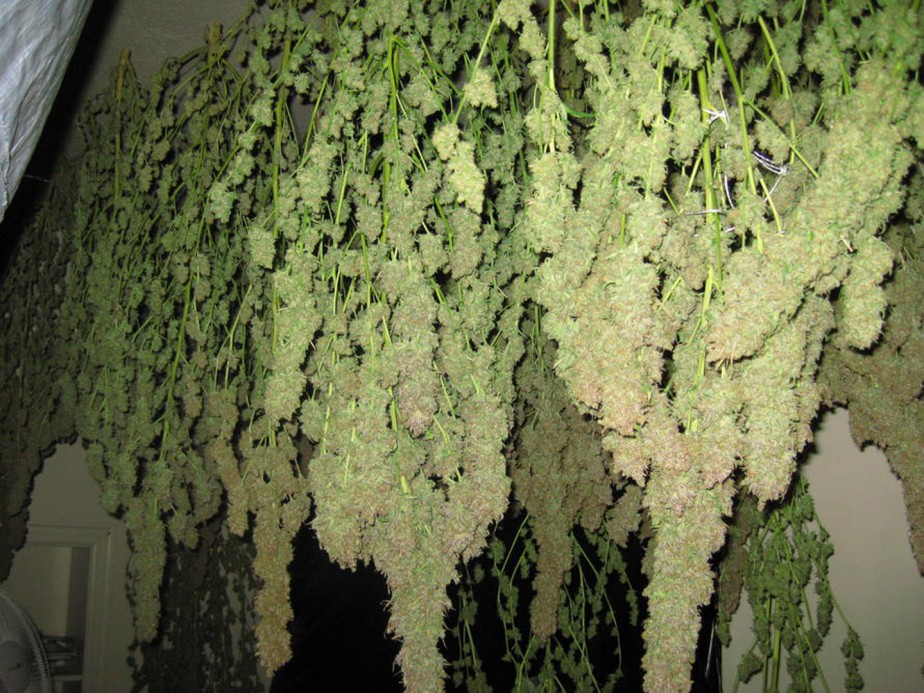 9 Pounds of pot grown by a Cannagrapher.

Now that you grew all this, what are you going to do with it? Sometimes it is best to hang on to it for a better price, or a time when there is a shortage. Whatever, you best store it well so it stays fresh and smokeable over time.

What happens to cannabis as it gets older? The color changes to brown, the resins oxidate and lose their flavor and aroma, the potency of the high, or the desired medical effect is depleted.

Over time many methods were used to keep things you want preserved. Oxygen and moisture being the agents of destruction when it comes to this.

Removing the oxygen from stored materials like food, medicine, and other valuables is key to long-term storage or preservation. Cannabis benefits greatly from being stored in an air-tight, oxygen free package. Once completely cured and dried, adding an oxygen absorbing package is a good way to ensure the product’s chances of being ‘fresh’ when opened for consumption at a much later date.

The most common oxygen absorbing packets contain nothing but iron pellets and salt crystals. It can also be in the packaging film, or in the plastic container the material is in. 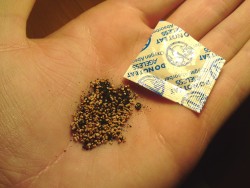 Iron pellets with salt from their package. 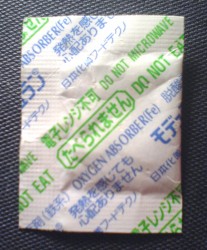 The iron rusts in the presence of oxygen. As it rusts it absorbs oxygen creating iron oxide; rust. The salt enhances and quickens the process.

Wikipedia has this to say about that: “Oxygen scavengers or oxygen absorbers help remove oxygen from a closed package. Some are small packets or sachets containing powdered iron: as the iron rusts, oxygen is removed from the surrounding atmosphere. Newer systems are on cards or can be built into package films or molded structures. In addition, the physical characteristics of the packaging itself (oxygen transmission rate – OTR) can dictate how effective an oxygen absorber can be, and how long it will stay effective. Packaging with a low OTR will let less oxygen in the closed package through the polymer barrier itself.
With some products, such as cheese, it has long been common to flush the package with nitrogen prior to sealing: the inert nitrogen is absorbed into the cheese, allowing a tight shrink film package. The nitrogen removes oxygen and “actively” interacts with the cheese to make the package functional.
More recently, other mixtures of gas have been used inside the package to extend the shelf life. The gas mixture depends on the specific product and its degradation mechanisms. Some package components have been developed that incorporate active chemistry to help maintain certain atmospheres in packages.” 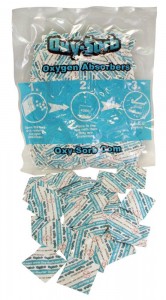 Large package of oxygen absorbers, typically found for sale cheaply on the Internet.

Another thing that gets to stored plant material is humidity. Moisture is also a killer… packages must be tightly sealed and monitored for condensation over time.

Use a desiccant package when filling your containers of cured, dried and trimmed buds. The desiccant is a hygroscopic (absorbent and moisture retaining) substance in a porous package, it absorbs the moisture around it. Silica is the most-often used substance for this, and believe it or not several hundred TONS are produced annually just for packaging.

These are available in large sizes handy for large bins and containers.  There are large size Tyvek bags filled with calcium chloride, which also traps moisture and is cheaper than silica gel. It works well in container size environments.

Lately I have seen five-gallon size Mylar bags used with oxygen absorbers and a desiccant pack. Easier and safer to deal with than glass jars, which are equally effective, but do break, and are heavy. 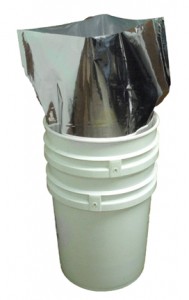 You can get all these easily on the web, or at your local shoppe.

So doing this will prevent mold, preserve taste and flavor, and extend shelf-life without adding chemicals. Can’t really think of anything negative about this except the bags should be cleaned and recycled, but not reused.

Copyright 2016 ICMag.com, written by Payaso. All images are from Wikipedia, except ‘9 pounds’ which is from ICMag.com