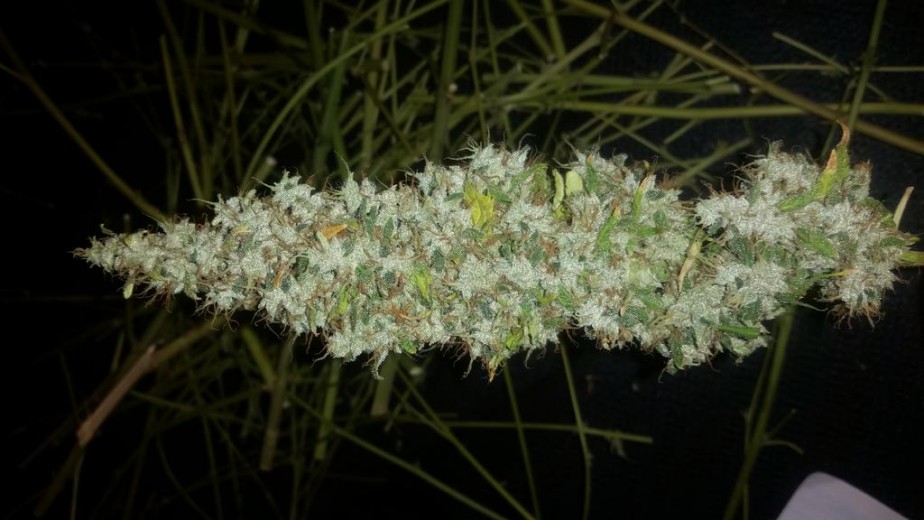 This last test grow done by CoCoSativas of Reeferman‘s seeds has gone rather well, as you can see above in the photo of a finished bud of the Hau Bac x Golden Temple Kush.

CoCoSativas' grow tent, with Reeferman's genetics. Here is another view of the tent.

CoCoSativas has a thread detailing the test grow, titled CoCoSativas testing reefermans sativa crosses which has a lot more information than here in this story.

Note from Charles-Scott (aka Reeferman) about these strains:

“…the Big Sir – these are from the Golden Temple Kush breed…The Golden Temple Kush is a pure Landrace hash plant from north of Amritsar, India, where the golden temple is collected within a 10 km of the border with Pakistan. It is nothing like OG Kush, or what we call Kush in North America, it’s from the Hindu Kush region… f-1…tested great and just produce bigger more viable plants, I am sure you will see.
The Golden temple Kush does not seem to effect the overall flavour or structure in hybrids, rather it tends to just increase density and shorten flowering times.
As I have stated I have 5-6 years of breeding around this, and thought we should do a little public investigation…
Charles.”

Here are some finished buds from the test grow:

CoCoSativas goes on to tell us:

“I only grow in coco these days. I only grow indoors, as I’m located in Canada, and it is not ideal conditions for outdoor growing in my area. In future I may move to BC and enjoy outdoor plants also.

Being a haze guy, and growing lots of Dutch seeds, I use Canna food, and Gavita lights. I’ve even adopted the 600 watt hps per square meter (4×4 if you are American) instead of doing the 1000 watt over a 5×5. It’s crazy but I yield twice as much with 60% of the light and less space.

I used to grow organic in soil, but now I do coco hydroponic, I murder my organic yields now. Anyway I really use a European model for my grow and it does me a lot better than the North American style I used before. I am branching out trying some new stuff, Eskobar chocolate cheese; and some OGs, which are a first for me.

I ended up yielding roughly a pound from my square meter powered by a 600 Hortilux HPS and Gavita Digistar ballast.

The Big Sir was my favorite. A totally elite plant that surprised even Charles. It’s the best smelling weed I’ve ever encountered. When I took it in the grow store and pulled it out, my buddy there frantically tried to pull cash out and slam it on the table. I told him it’s not for sale and they were so bummed. I told them next round… I did smoke a joint with them that was obviously too strong for them, as they were turnips when I left the store.”

Thanks for visiting my garden.